Capital Audio Fest is one of my favorite shows. For me, Rockville is a vacation with my friends that happens to be an audio show, but that doesn’t mean we don’t get down to business while there. We visit with many of our customers, perform upgrades to their systems and advise them of Wolf plans in the coming year. Capital continues to be one of our best shows for producing sales, and we have a new class of Wolf users who will be coming on board next week and we are excited for them! 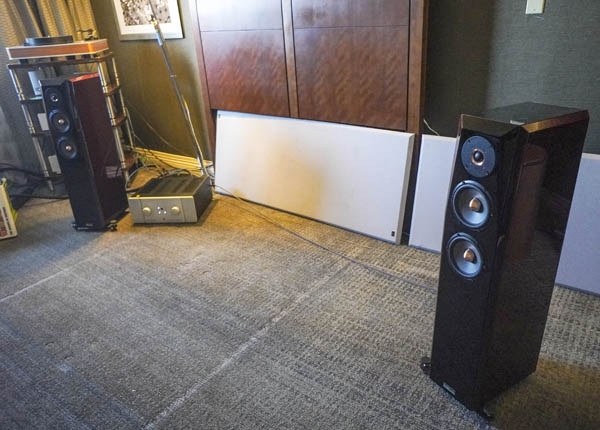 Wolf was in 5 rooms and a booth this year, and those rooms were consistent in that they had some of the best sound at the show. Wolf has a history with Tenacious Sound and Now Listen Here and collaborated on our third DC show together in rooms 315 and 319. 315 featured Joseph Audio’s Perspective2 Graphene Loudspeakers and the room sounded excellent whenever I stopped in. Jeff Joseph is a brilliant designer and a really fun guy to hang out with. Unison Research CD Due DAC and Unico 150 Integrated handled the decoding and amplification, while Audience’s AU24 SX cabling and aR6 power conditioning connected everything. Here is some show coverage of that room:  Stereophile 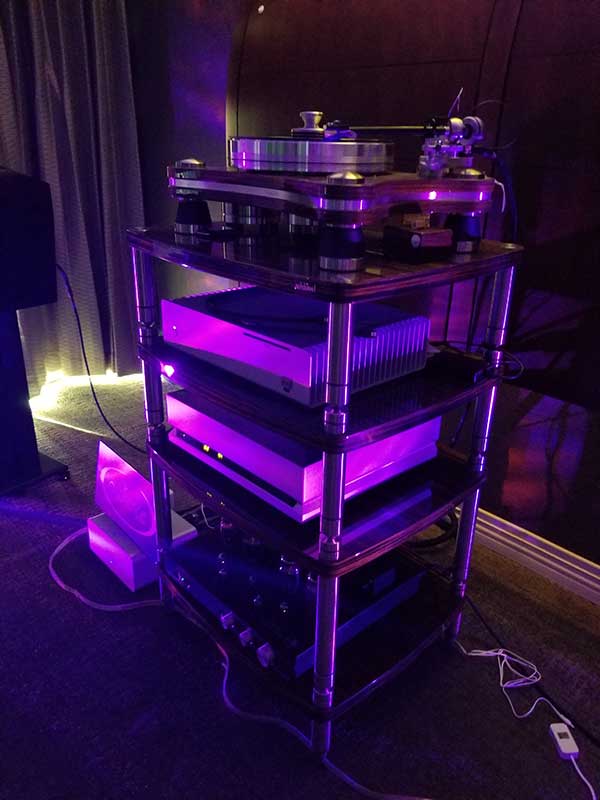 Pictured at left is Room 319. VPI Industries’ sexy Prime Signature in Rosewood topped the also sexy SolidSteel – I can’t find it’s name – Derda, help – and also, I want one. Technical Audio Devices D1000 DAC handled the decoding, and when it comes to DSD, it is out of this world. Rogue Audio’s Cronus Magnum integrated handled the heavy lifting, Audience’s amazing frontRow cables connected it, and Eggleston Works Nico bookshelves made the music.  About Eggleston… they continue to impress me, from the Nico’s and Emma Evo’s to the Kiva’s and their bigger offerings, there is something to Eggleston that elevates them far above more expensive or perhaps higher profile speakers.  Their design is iconic, their lines are instantly recognizable and their sound is bigger than the Nico’s would have you expect.  This room was instantly good sounding, thanks in no small part to the Wolf and its ability to get out of the way and let the music do the job. In addition to fantastic sound and a good playlist courtesy of Audience’s Lenny Mayeux, Lenny’s awesome wife Nicole did a fantastic job decorating the room. The inclusion of disco-ish balls and Phillips Hue lights created a cool aesthetic that helped me forget I was sitting in a hotel room. Aesthetics are becoming increasingly important to me… maybe i am just getting old, but an attractively appointed room helps my mind get into the right space for critical listening.

To that end, Mark Conti of MC AudioTech had a great show this year, and Wolf was very happily along for the ride. Mark’s speakers have an iconic look, and this is the second or third show where I have heard them sound fantastic. Mark is a natural showman, and his demos are entertaining and informative. Funny story, Mark bought his Wolf from his friends at The Cable Company, and for whatever reason we never got a chance to connect with him, never did the First Time Setup, and never knew he’d be taking it into the wild for show purposes. I was 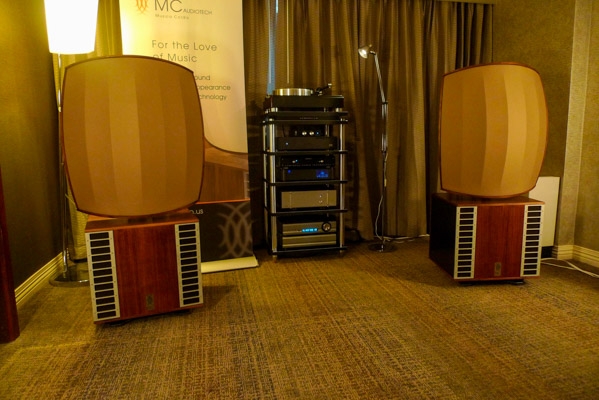 walking the halls in Denver back in September when I saw a room sign that simply and mysteriously said ‘Wolf’ at the bottom of the sign. I walk into a packed room and sure enough, there was a Wolf on the shelf! So, in typical Philadelphia fashion I walk in and say, “Who the F— are you?!” Being a fellow Philadelphian, Mark responded with “I’m Mark Conti, who the f— are you?!” and a  great acquaintance was born. Mark is really cool, his tech is cool, and his speakers sound awesome. Read some info about Mark and his awesome speakers: Stereophile Part-Time Audiophile AVShowrooms 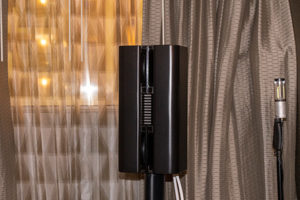 Room 504 was a standout – Mike Kalellis of Arion Audio is a lifelong engineer and raced cars prior to starting Arion Audio. Mike set to work on a new version of AMT’s Heil driver that could go beyond the Heil’s traditional specs, becoming his proprietary HVT (High Velocity Transducers). After the success of his Apollo speaker system, a pair of which grace the Harry Weisfeld’s personal stereo system,  he created this bookshelf version of his Apollo speakers named the Iris and paired with our Alpha 3 SX and T+A’s SDV 3100 HV Reference DAC, this room had a hell of a lot going for it! Arion Audio is a real standout to us, a brilliant engineer pushing the boundaries of existing technology to create something wholly different than what we are used to. DSD1024 was on display and the Iris speakers were a perfect fit for conveying that level of resolution to the listeners. This may have been the first show display where DSD1024 was available. Though at this time we only have six tracks – and a big thanks to Floor of NativeDSD for them – they sounded amazing, with a huge sense of space in the highs and the lows that seem to me to be one of the hallmarks of DSD Audio. DSD1024 reaches a new level of information retrieval that further widens the gulf of digital expectations to our new digital reality.

This year we brought three of our newest Alpha 3 SX servers to the show to drive the rooms and the Qobuz desk.  We’ve partnered with Stillpoints and eXemplar Audio to combine the best of our collective knowledge to bring the best single-chassis system we could to market. The result is astounding. The Stillpoints standoffs isolate noisier components from affecting the output stage, the grounding plane and power-line technologies remove power related noise entirely. The result is a server system that truly gets out of the way of the audio, sounding so natural and live that Herb Reichert sat visibly happy with what he was hearing while Greg Brown’s “Roadhouses and Automobiles” played in Room 319. I had a good talk with Herb, he visited the room at the end of the show and we spent a few minutes outlining the components in the system and discussing the role of the server in getting even better sound out of an already great DAC.

Last but not least, the Qobuz desk. Eric Benoit and David Solomon are fixtures at HiFi shows, their love of music and love for Qobuz is evident in everything they do. For those that don’t know, Qobuz is an Audio Streaming service that launched in the US in 2018. Qobuz is my personal pick due to their selection and curated playlists and thanks in no small part to the efforts of David, Eric, and the Qobuz US head, Dan Mackta. Awesome dudes all around, and a no brainer for me when we had a chance to put a Wolf on their desk – paired with the EmmLabs DAC for show visitors to enjoy. First listen honors were given to Pam, pictured here. Having a setup like this is great for Wolf because it lets people get on and play with our system. Showgoers are understandably a bit reticent to go touching the screen in a listening room upstairs, but the imagery and ease of use is a definite draw. I catch more than a few eyes lingering on the screen as we navigate our playlists in the room, and occasionally we will let people play around and pick the music they’d like to hear, but we need to have more consumer facing Wolfs like this in the halls and open spaces around the show. So, David and Eric, thank you for the opportunity of letting us put our Wolf there, and we hope that you and your customers enjoyed it! 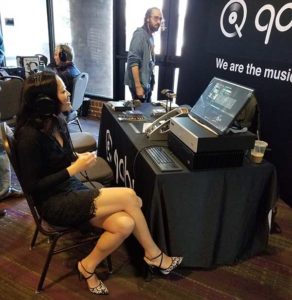 A big thanks to Gary Gill and Christina Yuin for putting on such an excellent show, and we’ll see you next year! 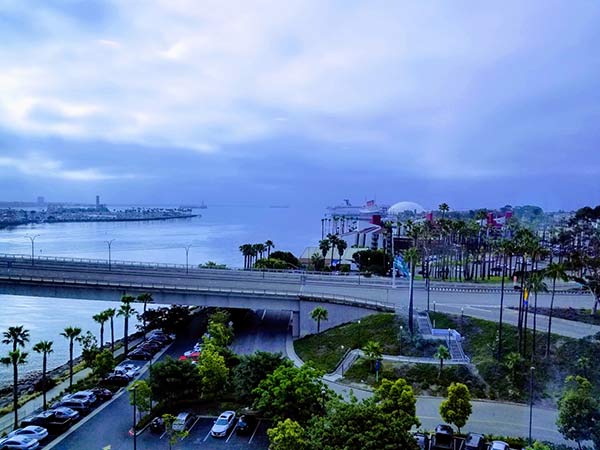